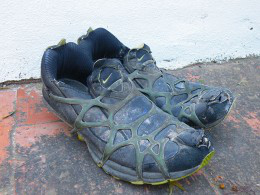 Long ago and far away running shoes where only used in the gym or in sports. But now sneakers are well thought out designer objects.
Of all fashion items, I probably like shoes the best. by looking at ones shoes you can tell a lot about a person. Far more than a sweater or a blouse. Shoes are personal and reflects the persons identity and personality. That’s why I like Nike shoes. They are designed like art works, color form and design are well thought out.
Another pair of shoes I cherished where my spider web Nike fashion sneaker, again laceless. Officially they call them Kukini Free Running Shoes but I call them spider web shoes. They lasted long but in the end I used them as a flower pot.Ah well, one of those silly things you do. But still they are at least used. I hate it to throw things away. If possible, I always try to find a second life for them.
Nike is one of the great designers who made sneakers what they are today. Not only footwear for sports, but fashionable wear as well. But to be honest, it’s difficult to find Nike sneakers without laces, most of them have a more traditional closure system.

It still surprises me how long the plastic spider man “netting” hold together. In the end it was not the “spiderweb” of the trainers that gave in but the nose of the shoe. Still, I used the shoes in loads of situations. Running, casual wear, building work and at times I treated them badly. But they survived for a long time which tells me something about the quality of the shoes.

I know the shoes are not in the famous spider man black red color combination but I’m not that picky and I bought the shoes first of all because I liked the different style. I was not really looking for spider man shoes.  Although if you are lucky you can still find the red black kukini trainers somewhere on ebay. Amazon does not has them. They only have the blue, black and green flavours.
The name Kukini comes from the Hawaiien word for runner. The Kukini in Hawaii where special trained warriors who delivered messages between tribes. They where elite runners who had the important task to bring messages from one tribe to another.